Bangladesh swap: a loan or an investment?

FGN budget – an expansionist position in 2022

This exchange is reported as the first time that Bangladesh has granted financial assistance to another country in its history. Bangladesh, which was ridiculed as a “bottomless basket” by US Secretary of State Henry Kissinger in 1971, now holds a large stock of foreign exchange reserves of $ 45 billion, or 10 times Sri’s reserves. Lanka.

Defending the recent $ 250 million currency swap deal with Bangladesh, money, capital market and state-owned enterprise reforms Minister of State Ajith Nivard Cabraal reportedly said in recent webinar on the port city of Colombo that it was not a shame for Sri Lanka to enter into such an agreement. He expressed similar sentiments at the Sri Lanka Investment Forum held last week.

It is reported that he mentioned, “Bangladesh lends more money to the US than to anyone, just like Sri Lanka. When Sri Lanka lends money to the United States or any other advanced country in the European Union, we call it an investment. The only thing (difference) when you give it to a so-called third world country is a loan – that’s the only difference. ”

The above statement should be analyzed with care, as there are several caveats surrounding it.

In terms of the internationally accepted statistical framework on transactions between a particular country and the rest of the world, the treatment given to loans, investments or any other transaction is the same for rich countries as for poor countries.

Therefore, it is incorrect to say that when a country gives a loan to an advanced economy like the United States or the European Union, it is considered an investment whereas such a loan to a third world country like Sri Lanka is treated as a loan. There is no discrimination as such in the statistics of international financial flows.

From the perspective of the lending country, a loan to a poor country or a rich country is an investment. But for the borrowing country, be it Sri Lanka or the United States, such a financial influx is a foreign loan.

Therefore, it is misleading to change the nomenclature of foreign loans as an investment to avoid the embarrassment caused by borrowing from Sri Lanka to Bangladesh or any other country.

Trade with Bangladesh is not an investment but a loan

Ironically, this exchange is reported as the first time that Bangladesh has extended its financial assistance to another country in its history. Being one of the poorest countries in the world receiving billions of dollars in aid, Bangladesh has yet to be seen globally as a lender to other countries.

But its economy has made remarkable progress over the past two decades and became the fastest growing South Asian country in 2020. Bangladesh, which has been ridiculed as a “bottomless basket” by the secretary State of the United States Henry Kissinger in 1971, today holds a large stock of foreign reserves of $ 45 billion, 10 times the reserves of Sri Lanka.

Starting with the first edition of the Handbook published by the IMF in 1948, and continuing to the latest edition of the Balance of Payments and International Position Handbook (BPM6) published in 2009, the guidelines have evolved over the decades to take into account the rapid evolution of trade and financial transactions between countries. 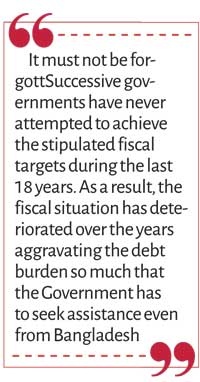 Financial inflows through swap agreements are included in other investments as loans. Therefore, these are not investments for the borrowing country – Sri Lanka.

Thus, foreign loans are treated as debt commitments in terms of BPM6, and this is common to all IMF member countries regardless of their development status.

Sri Lanka recorded net capital outflows in 2020, as shown in Table 1. The net acquisition of financial assets and the net increase in financial liabilities declined significantly during the year.

Sri Lanka shows a negative balance of $ 48 billion in its international investment position, as shown in Table 2. This is mainly the result of the outstanding government loans of $ 28 billion representing 50% of the total. liabilities.

There is an upward trend in foreign borrowing by commercial banks and blue-chip companies as well in recent times, as they have been allowed to borrow foreign currencies in global financial markets since 2013.

A few days ago, the Central Bank, in an attempt to encourage foreign currency inflows into the country amid the balance of payments difficulties, urged the private sector to seek avenues of offshore financing by taking advantage of its strength. In order to hedge the currency risk of foreign borrowing, the Central Bank is ready to provide a zero cost swap facility for the private sector. An option is also given to private entities to invest in US dollar funds raised abroad in Sri Lanka Development Bonds (SLDBs).

Such induced borrowing will further increase the country’s debt liabilities and intensify debt servicing problems, as repayments and interest payments on such loans must be secured using the country’s foreign exchange reserves in all countries. case, regardless of the type of borrower.

The government is due to settle an international sovereign bond of $ 1,000 million in July and Sri Lanka’s development bonds of $ 1,325 million in August of this year.

The debt problem has now worsened due to the difficulties the government faced in attracting foreign investors to its dollar-denominated bonds in recent auctions. This limits the rollover of maturing foreign bonds and other loans.

Reflecting investor concerns over Sri Lanka’s creditworthiness, the last two Sri Lanka Development Bond (SLDB) auctions were largely underwritten. In the auction held in November last year for $ 200 million, the Central Bank was only able to raise $ 24.82 million, representing up to 67% of the subscription. The January auction, which had a bid of $ 200 million, raised only $ 43.6 million reflecting a 78% subscription.

There is a noticeable increase in recent SLDB yields, again reflecting the worrying concerns of foreign investors over the country’s debt sustainability.

According to unhealthy swaps

Given the difficulties in raising foreign loans on international capital markets in the context of the country’s sovereign rating downgrades in the recent past, the Central Bank has turned to swap agreements to temporarily resolve the difficulties of the country. balance of payments worsened by the increase in debt service commitments falling in the coming weeks.

Loan settlements due over the next 12 months amount to $ 7.3 billion. Of that total, foreign loans raised in the domestic market through offshore banking services in the amount of around $ 3 billion could be rolled over, leaving around $ 4 billion for immediate settlement, according to the Central Bank.

Prior to the Bangladesh swap, an agreement was signed with the People’s Bank of China for a swap facility in the amount of CNY 10 billion (about $ 1.5 billion). Further exchange facilities for Sri Lanka are in the works, according to the finance ministry.

As a result, Treasury guarantees provided for bank loans to public enterprises and private entities should be increased from 10% to 15% of GDP.

In contrast, the current debt-to-GDP ratio is 110% of GDP, and the budget deficit is expected to exceed 12% of GDP this year.

Successive governments have never attempted to meet the budgetary targets set for the past 18 years. As a result, the fiscal situation has deteriorated over the years, exacerbating the debt burden so much that the government has to seek help from Bangladesh itself.

In trying to avoid the embarrassment caused, no politician has the right now to claim that the exchange with Bangladesh is an investment but not a loan, as this analysis proves.

All prescribed budget targets are now carried over for another 10 years, passing the long-awaited tax adjustments on to future generations happily!

(Professor Sirimevan Colombage is Emeritus Professor of Economics at the Open University of Sri Lanka and former Director of Statistics at the Central Bank of Sri Lanka, contactable at [email protected])

Comment: Should we be worried about a rise in the cost of living in 2022?