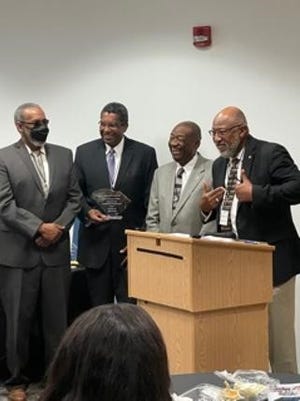 Bob Atkins, Acting Dean of the Faculty of Arts and Sciences-Camden, Rutgers-Camden University, has joined the Rippel Foundation board of directors in July 2021. He is the former director of the Robert Wood Johnson Foundation (RWJF’s) New Jersey Health Initiatives program.

Shamira Chapel became program coordinator at the Donaghue Foundation in August 2021. His responsibilities include “assisting in all aspects of the grant process” and strategizing on “ways to assess, evaluate and improve new and existing initiatives of the Foundation” , according to his biography online. Previously, Chappell was a Scientific Research Associate at UConn Health and holds a Masters of Public Health from UConn Health.

Roxanne cuebas joined the Health Foundation for Western and Central New York (HFWCNY) in May 2021. As the program manager, “she helps assess incoming grant applications, develops recommendations and presents promising proposals for funding approval” in the funding area of ​​16 counties of the foundation, says his biography online. In addition, it “monitors and supervises the funded projects”. Previously, Cuebas was a project administrator at Catholic Health’s Community Partners of Western New York.

Tim daly was promoted to program director of the Joyce Foundation Gun Violence Prevention and Justice Reform Program in July 2021. A lawyer, he brings “years of legislative and advocacy experience to Capitol Hill and beyond,” according to an email alert. Daly succeeds Nina Vinik as program director. Vinik worked at the foundation for 13 years and stayed on as a consultant after stepping down as program director.

Hélène DuPlessis, an executive doctor, was appointed as a new member of Blue Shield of California Foundation board of directors, as of January 2022, according to an October 2021 press release. She is a pediatrician and director of Health Management Associates. DuPlessis brings “valuable information about the health and lives of children,” Foundation board chairwoman Evelyn Dilsaver said in the statement. “His commitment to caring for children on a holistic level as well as his broad leadership in many aspects of health care will provide important perspective and expertise to our planning and discussions. “

Joan guzik was promoted to Director of Quality and Efficiency at United Hospitals Fund (UHF), effective September 3, 2021. In this role, she will lead the UHF Quality Institute. Lynn Rogut, who held the titles of Quality Director and Team Leader of the Quality Institute, retired on that date. She retired “after a decade of leadership at [UHF] into two separate relays ”, according to an electronic alert.

Read a May 2021 article on Health Affairs Forefront, GrantWatch section, by Joan Guzik, titled “Navigating the Home Care Transitions of SNF During a Pandemic – Lessons Learned”.

Neel Hajra is the new CEO of the Michigan Health Endowment Fund. Previously, he was CEO of the Ann Arbor Area Community Foundation. Hajra succeeds Paul Hillegonds, who was the founding CEO of the Health Fund. Hillegonds remains on the staff list: he is now the chief adviser to the CEO.

Marilyn Hennessy, first CEO and chairman of the RRF Foundation for Aging (formerly the Retirement Research Foundation), died in March 2021. She retired in 2008, but was a retired foundation administrator, according to an obituary from legacy.com that was published in the Chicago Tribune. An April 2021 “review” on the RRF site described Hennessy as “soft, modest and humble” and suggested that “Marilyn always chose her words wisely, but when she spoke, people felt their power, the passion and compassion behind them; they listened and were prompted to act.

Irish holly was promoted to manager of grants at the Maine Health Access Foundation in August 2021. She was previously associated with scholarships.

Kate kendell became the very first Chief of Staff of the California Endowment and its Chairman and Chief Executive Officer, Bob Ross, in June 2021. Previously, she was Acting Chief Legal Officer at the Southern Poverty Law Center. Kendell, a lawyer, previously served on the foundation’s board of directors.

the Rippel Foundation appointed two executive vice presidents, who joined its staff on October 4, 2021, according to an email alert. Alain lieber is the past president of Overlook Medical Center in Summit, New Jersey. Becky payne came to Rippel from the Centers for Disease Control and Prevention (CDC), where she held various leadership positions. She told me that more recently she had been seconded to the office of the Assistant Secretary of Health in the Department of Health and Human Services, where she was responsible for long-term recovery and resilience planning for the entire federal government.

Ugwuji N. Maduekwe joined the staff of the Advancing a Healthier Wisconsin Endowment as Deputy Director in August 2021. She is also Associate Professor at the Medical College of Wisconsin School of Medicine. Previously, Maduekwe was an assistant professor of surgery in the division of surgical oncology and endocrine surgery at the University of North Carolina at Chapel Hill, according to her online biography.

Tina Markanda left on Canon Foundation, in North Carolina, where she was the executive director. She now sits on the executive committee of the board of directors of the Foundation for Health Leadership and Innovation, a non-profit organization located in Cary, North Carolina. Cochrane gene, a household name over the years in healthcare philanthropy, most recently served as Interim Executive Director at the Cannon Foundation. Suzanne Philemon was promoted to executive director effective Jan.1, 2022, Cochrane told me.

Sandra Martínez, director of public policies at the California Wellness Foundation, left Cal Wellness on October 1, 2021 to become Vice President and Chief of Staff of the LA84 Foundation. According to its website, LA84 “is a nationally recognized leader in supporting youth athletic programs and educating the public on the role of sport in the positive development of young people.”

Kate mcevoy became a program officer at the Milbank Memorial Fund in September 2021. According to her online biography, “she leads the Fund’s State Leadership Programs and Network and guides the Fund’s Healthy Aging Network.” Previously, she was “Director of Health Services in the Connecticut Department of Social Services, where she oversaw care delivery and payment reform in Medicaid, [the Children’s Health Insurance Program], and long-term services and supports.

Among the new members elected to the National Academy of Medicine are two members of the foundation’s staff, according to a press release from October 2021. They are Anita KM Zaidi, Chair of the Gender Equality Division and Director of Vaccine Development, Surveillance, and Enteric and Diarrheal Disease Programs, Bill & Melinda Gates Foundation and Nancy Messonnier, Executive Director, Pandemic Prevention and Health Systems, at the Skoll Foundation. Previously, Messonnier had headed the CDC’s National Center for Immunization and Respiratory Diseases.

Jana Renner was promoted to Senior Program Officer at the Paso del Norte Foundation for Health, according to an August 2021 article on the foundation’s website. Renner was previously a program manager. His expanded responsibilities include the development of strategic plans.

the RWJF elected “two nationally recognized champions of racial health and equity” to its board of directors, Rich Besser, chairman and chief executive officer, said in a November 2021 press release. Starsky wilson is President and CEO of the Children’s Defense Fund and the CDF Action Council. Previously, Wilson, a pastor, headed the Deaconess Foundation, in St. Louis, Missouri. Edgar Villanueva, who also joined the board, “is an author, activist and expert in social justice philanthropy” and “is the founder and director of the Decolonizing Wealth Project,” the statement said. He wrote Decolonize wealth, a “best-selling book in 2018”. (The second edition of this book has been published.) Wilson and Villanueva will join the RWJF Board of Directors on January 26, 2022.

Kerry Jones Waring was promoted in September 2021 from communication and public relations manager to vice-president in charge of communication at HFWCNY.

Nancy C. Yedlin, vice-president of the Donaghue Foundation, retired in June 2021. The funder’s announcement mentioned “his leadership in designing grant programs and other activities that strengthen the bond between creators and users of evidence to improve health.”

Read a July 2021 article on Health Affairs Forefront, GrantWatch section, by Kelly Rand of the ABIM Foundation and Nancy C. Yedlin, titled “A project to explore low-value care among black and Latin communities in 2020: what its two funders learned. “

Previous SM Line expected to increase HMM investment when Seoul sells its stake
Next Stock markets and Omicron: why investors don’t need to panic yet

NPOs should focus risk assessment on expenses Too often, the review of strategic financial policy …